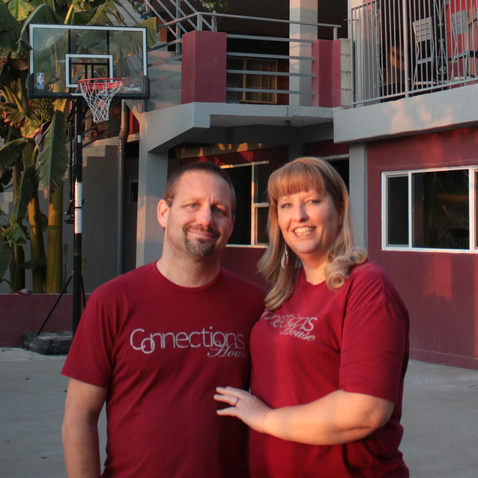 Ron & Kristy Struska are missionaries with Saving Grace World Missions. They have been serving in Rosarito since May 2010. Ron & Kristy run Connections House, which provides dorm-style housing for short-term mission teams, as well as ministry planning for the teams. ﻿﻿

The Struska’s arrived in Rosarito full-time in May of 2010, after spending almost four months in the summer of 2009 in Rosarito, with their two children. Their son, William, is 19 years-old, and recently moved to Wisconsin. He enjoys playing basketball, video games, and working on cars. He is enjoying being closer to family. Besides his full-time job, he is also flipping cars. Ron and Kristy’s daughter, Brittany, is 22 years old. She lives in Tijuana with her husband, Brian, and works in the San Diego area. Brian is an Assistant Pastor one of Calvary Rosarito's bilingual church plants, Calvary Chapel Playas, in Playas de Tijuana. Brittany serves in youth ministry, worship, and more, alongside Brian, who is also the Worship Leader at CCP. Brian recently graduated UABC in Tijuana and is certified to teach languages. Recently, Brian & Brittany received the calling to plant a church in Calpulalpan, Tlaxcala, near Mexico City. They are planning to move there in December 2022 to plant the church. Shortly after that, they will open a church planting school as well. They plan to use the knowledge and talents that the Lord has given them and teach worship and languages at the school. Ron & Kristy have two grandchildren as well, Joshua & Kimberly. The only downside to the church plant in Calpulalpan, is having the family (especially these beautiful grandkids) so far away!

When the Struska’s moved to Rosarito in 2010, they served with a ministry organization to begin and lead a construction ministry. This ministry enabled teams from the U.S. and Canada to build 16’x20’ homes for local families in need. As this aspect of ministry slowly grew over four years, the Struska’s also worked with teams serving in community ministry. This type of ministry had several parts to it. Teams would serve through children’s ministry (VBS), soccer (instruction, games, and sharing personal testimonies), men’s Bible studies, women’s ministry (Bible study, crafts, worship), or any combination thereof. After two years of serving in this ministry, Ron became the director of the outreach center where they lived and worked, and Kristy became the Administrative Assistant and Intern Coordinator. God did amazing things through this ministry, but after four years He made it clear through many ways that their time there was to come to a close. The very next day the Struska's received a phone call asking them to stay in Rosarito and join the staff at their church, Calvary Rosarito (CR). After much prayer, the Lord made it clear that the Struska family would continue to live and serve in Rosarito. They accepted the position of overseeing Outreach Ministries at CR and working with their teams. The Lord has grown the ministry immensely! In March 2016, they opened Connections House. They were able to purchase the property in 2018, and by June 2020 God had provided enough funds and materials to add a 3rd floor and open a new commercial kitchen and large dining room.
﻿
﻿Ron & Kristy continue to use the skills the Lord has given them to host teams and serve in the Rosarito/Tijuana area and beyond! Their church, Calvary Rosarito, has planted over 30 churches since 2018, in the U.S., Guatemala, and all over Mexico. In the last year﻿ and a half, Ron and Kristy have had the opportunity to take several trips to some of these church plants in Loreto (BCS), Hermosillo (Sonora), Mazatlán (Sinaloa), and Calpulalpan (Tlaxcala). They look forward to continuing to serve and hopefully begin bringing teams from the U.S. and Canada to some of these places as well! ﻿